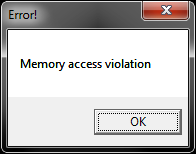 Memory Access Violation (also known as MAV) is the most common error message in Wonderland. It can appear in all five games and both editors, though it is more common in the Classic Trilogy games. The error appears when the program attempts to use a part of the memory that it's not authorized to use (therefore "violating" the computer's rules). Other various error messages include Parameter Must Be Positive, Abnormal Program Termination, Illegal Instruction, Unknown Runtime Exception, Array Index out of Bounds and General Protection Fault.

The following events can cause a Memory Access Violation error.