From WonderWiki
Jump to navigation Jump to search

Fire Island is an island in the south of Wonderland. It was first introduced in Wonderland Secret Worlds and later became the primary setting in Wonderland Adventures: Mysteries of Fire Island. 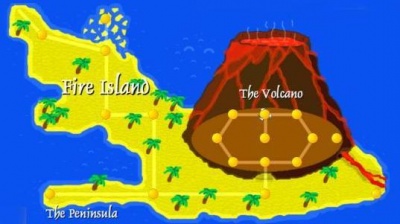 A map of Fire Island as seen in Wonderland Secret Worlds.

In Wonderland Secret Worlds, Fire Island was depicted as a mostly flat and sandy island with The Volcano in the eastern area pouring lava into the sea. There was a big peninsula on the bottom left. At that time, Kaboom!s were considered wild and had not created a village yet.

Fire Island was briefly mentioned during Wonderland Adventures. A pirate in the Wonderland Harbour reveals that a team of pirates sailed to Fire Island, but nothing was heard from them again. 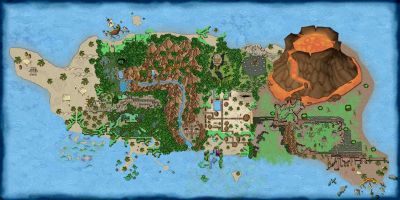 Fire Island was given a redesign in Mysteries of Fire Island. Its general shape is similar to its Secret Worlds incarnation, but the interior is drastically different. Instead of being sandy throughout the island, the interior now consists of a jungle covering much of the western and central areas, a mountain range and canyon running through the middle, the Kaboom! Village in the center-south area, the Jungle Temple just to the north of the Kaboom! Village, a beach surrounding much of the west half of the island, The Volcano in the northeast area, and the Acid Pools (a scar formed by The Volcano's previous eruption) in the southeast area. The last area is where the Wonderland Pirates mentioned in the first Wonderland Adventures can be found.