From WonderWiki
Jump to navigation Jump to search 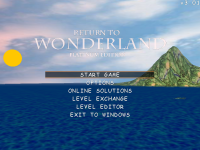 The introduction of Return to Wonderland depicts a sunrise over the land.

Return to Wonderland (abbreviated RTW) is the second Wonderland game to be released. In addition to the main game, a level editor is present allowing players to create levels and share them through the Wonderland Discussion Board. Since its initial release on November 18, 2003, the game has received two expansions making it the largest game of the Classic Trilogy.

The story serves as a direct sequel to Wonderland. As a new day dawns over Wonderland, its inhabitants wake up to find out that the Rainbow Coins, whose magic keeps Wonderland safe, have been scattered across the world putting Wonderland’s existence at risk. Once again, Stinky and Loof set off to collect the Rainbow Coins and save the day.

These level sets are accessible through the custom level directory. There are a total of 15 levels.

Return to Wonderland Deluxe Edition (abbreviated to RTWD) is the first expansion to Return to Wonderland. It was released on August 28, 2004. In addition to introducing new level elements and two new playable characters, this expansion adds a new level set of 51 levels containing a whole new story as well as a new set of tutorial levels replacing Wonderland 101 from Classic Edition. Additional types of pre-existing elements such as new colors for Gates and Teleporters and different types of floor were also introduced. New voice lines were added when switching characters, dying, and booting up the game.

While on a walk to collect Rainbow Coins, Stinky notices some Rainbow Spirits and is intrigued. Later on, he also sees some broken Z-Bots. He also spots some Rainbow Spirits together with some more broken Z-Bots and speculates that there could be a connection. Finding the whole situation tricky, he decides to meet up with Loof. The duo make their way to the Great Wonderland Gateway which takes them to the caves under the Foggy Mountains. While making their way out, they spot a strange shape under the magma and get a bad feeling.

Meanwhile, Qookie, a Stinker living somewhere west of the Foggy Mountains, is getting ready to collect Rainbow Coins when a bunch of Rainbow Spirits surround her cottage. Surprised by this, she sets off to find out more about them. While passing by a lake, she discovers that Rainbow Spirits can collect Rainbow Coins. After a few more encounters, Qookie checks up on her mushroom farm where she finds that a Rainbow Spirit has caused some of her mushrooms to grow to enormous sizes. A snowstorm begins to roll in, so Qookie decides to head back to her cottage before it gets too cold. Stinky and Loof then come out of a nearby cave as night begins to fall. They find Qookie’s cottage and decide to stay there. The duo meet Qookie, and they all become friends.

The story then cuts to Wondertown where Peegue, the mayor, finds out that all the Wondertowners have gone missing. After dealing with some Kaboom!s, he goes to the Old City to look for answers. He spots a UFO and a strange device that generates Boulders on the way there, and once he makes his way inside, he discovers that a bunch of UFOs are taking over Wondertown. He decides to take matters into his own hands and starts taking out the invading force. After reaching the City Centre, he takes out one last UFO. Just as Peegue is commending himself for potentially stopping an alien invasion, hidden motherships emerge from the ground and start dispensing more UFOs which begin overwhelming Peegue.

Back with Stinky, Loof, and Qookie, Qookie explains that in order to find out why the Rainbow Spirits are in Wonderland, they need to go to Wondertown where they’ll find an old temple said to contain a secret gate leading to the Rainbow World, home of the Rainbow Spirits. The trio make their way to Wondertown where they find UFOs everywhere. They go to Peegue’s house where they find a note from Peegue saying he has been abducted by UFOs. After that, they find the main transport station to the Alien Base and use it to head there and rescue Peegue.

Once in the base, the trio find Rainbow Spirits being held captive. After freeing the spirits, the trio are forced to split up. While separated, Stinky discovers that Box Generators dispense more boxes when there are no more of that box type available, and Loof finds out that UFO Motherships spawn in more UFOs once all of the UFOs have been eliminated. The trio eventually reconvene and make their way to the prison complex where they free Peegue. The gang get their revenge on the UFOs and use the escape hatch to return to Wondertown.

With words of encouragement from his friends, Stinky steps into the gate to the Rainbow World. He finds out it is difficult to see anything there. Stinky then solves various puzzles to open the Rainbow Gates and press the button allowing the Rainbow Spirits to return and restore balance to Wonderland.

In the epilogue, Peegue and his fellow Wonderlanders rebuild Wondertown, Qookie befriends the Chompers around her cottage and shares some of her giant mushrooms with them, and Stinky and Loof briefly consider retirement but decide against it in case another adventure is around the corner.

Return to Wonderland Platinum Edition (abbreviated as RTWP) is the second expansion and latest version of Return to Wonderland. It was released on December 14, 2005. In addition to even more new objects, support for Custom Backgrounds and Custom Textures and a new set of 20 levels were added.

All of the new Platinum Edition objects are classified under Tiles in the Editor.

Stinky finds himself in a strange new place. After using Transporters to progress, he finds out the place is highly unstable. With some hesitation, he enters the Rainbow Gate at the end.

Days later, Loof sets out to find Stinky and discovers a new type of Scouge that can be pushed. He then goes through a forest maze and ends up in the Jade Temple. There, he is introduced to Trampolines and Sticky Cubes. Loof eventually goes through a Rainbow Gate that leads him to an unfamiliar place. There, he finally reunites with Stinky, and the two of them go through a Rainbow Gate emitting a lot of heat.

It is then revealed that the Rainbow Gate led to the Fire World. Going through the Fire World, they come across Link Spheres and meet Shadow Stinkers. After getting separated, each Stinker encounters Warp Gates, and after reuniting once again, they exit through a Rainbow Gate leading back to Wonderland.

Stinky and Loof meet back up with Qookie and Peegue and are about to tell them about the things they saw and heard. However, Qookie and Peegue have already figured everything out, and it is revealed that some Shadow Stinkers have moved in near the gang.

The Platinum Edition levels are accessed under the custom levels directory. The world names are taken from WonderlandPlus.NET and are not official. 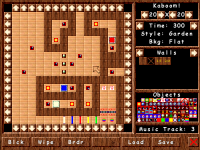 The editor has a simple, user-friendly interface.

Return to Wonderland contains a level editor that allows players create levels using any of the level elements seen in the official levels. The editor uses a 14×14 grid-based interface where objects can be placed on top of tiles. Levels larger than 14×14 must be scrolled around using the arrows around the editor window. Using the side windows, the level size (from 14×14 up to 99×99), time (from 10 to 900 seconds (15 minutes) in increments of 10 seconds), textures, background, and background music can be adjusted. The editor's power can also be extended by hex-editing levels. Some things that can be done with hex-editing include adding Metatiles, making levels larger than 99×99, and making the starting time limit greater than 15 minutes. However, it is recommended that only advanced users should attempt hex-editing because a wrong move may corrupt the level file. Additionally, some Metatiles and larger levels may cause glitches or even crash the game on certain machines.